Result
in about a 6 months

Congenital or acquired (often after the child delivery) a clitoris hood hypertrophy - a frequent cause of infringement of sensitivity of a clitoris.

This procedure should be performed for:

Procedure:  plasty of a hood of a clitoris with radio wave scalpel;

Purpose: to reduce the size, to eliminate asymmetry, a hyperpigmentation and an excess sagging of a hood of a clitoris;

How it works: the procedure is made in the conditions of the small operating room, on a gynecologic chair, under local anesthesia, the surgical plasty of a hood of a clitoris, with use of a radio wave scalpel;

Result: right after the procedure, the end result - in the 2nd month;

Important: the result may differ from what you imagine

Technique: after preliminary consultation with photo bracing and determination of necessary volume of excising of a tissue, the marking, anesthesia, excising is made and a plasty of a hood of a clitoris is carried out;

After treatment: 2-3 weeks of sexual rest, about one month without thermal procedures

Duration: the procedure is performed once, however in connection with the subsequent child delivery changes are possible

Soreness: is absent or is poorly expressed; 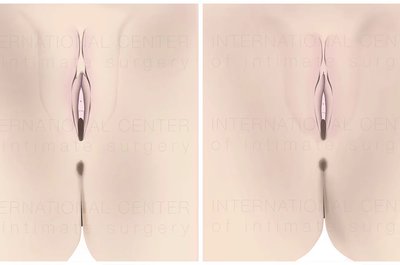 Before / after other procedures